Public ambulance services across the UK are required by law to respond to four types of requests for care, which are:

The ambulance requires a number of skill roles:

Strain on the service

Demand for ambulance services continues to grow rapidly. Between 2009-10 and 2015-16, the number of ambulance calls and NHS 111 transfers increased from 7.9 million to 10.7 million, an average year-on-year increase of 5.2%. Between 2011-12 and 2015-16, income for ambulance trusts’ urgent and emergency care activity increased by 16% from £1.53 billion to £1.78 billion. Over this period, activity (ambulance calls and NHS 111 transfers) rose by 30%. Commissioners have warned that, given current financial challenges in the wider health service, future funding settlements are likely to be tighter. Most trusts are struggling to recruit the staff they need and then retain them. The reasons people cite for leaving are varied and include pay and reward, and the stressful nature of the job. In 2015, ambulance trusts had a paramedic vacancy rate of 10%[1]. 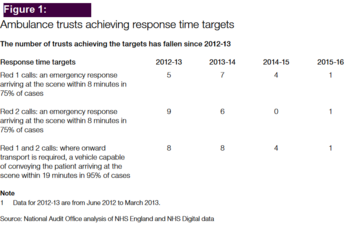 Performace across the 10 trusts[2]

In 2015-16, approximately 500,000 ambulance hours were lost due to turnaround at accident and emergency departments taking more than 30 minutes, which equates to 41,000 12-hour ambulance shifts. Transferring the care of a patient from an ambulance to an accident and emergency department is expected to take no longer than 15 minutes, with a further 15 minutes for ambulance crews to make their vehicle ready for the next call. The percentage of transfers meeting the 30 minute turnaround expectation has decreased. In 2015-16, only 58% of hospital transfers met the 15-minute admittance expectation and only 65% of ambulance crews were then ready for another call within 15 minutes. Performance against the response time targets is getting worse. In 2015-16, only one trust (West Midlands) met the three targets (see Figure 1) [3].

Ambulance services are not commissioned consistently across England, with differences in how they are funded and what they are funded for. Many of the factors contributing to these variations are within the control of ambulance trusts or the wider health system[4].

The 10 ambulance trusts are finding it challenging to engage with the wider health sector due to the growing number of stakeholders (privatisation of the NHS) that trusts are required to work with. The wider system does not always make good use of the ambulance services’ experience or recognise the impact that changes to other local services have on ambulance services[5]. 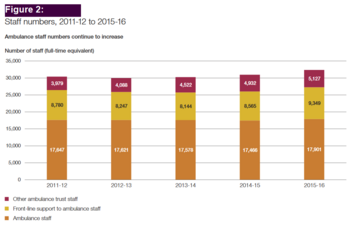 The number of staff (full-time equivalent) working for the ambulance service in England has increased from 30,400 in 2010-11 to 32,400 in 2015-16, an average year-on-year increase of 1.6% (see Figure 2). Despite these increases, most ambulance trusts are carrying a large number of vacancies. In April 2015, the Migration Advisory Committee, a non-departmental public body that advises the government on migration issues, added paramedics to the relevant shortage occupation list, stating it had been told that the paramedic vacancy rate in England was 10%[7]

Trusts are facing challenges retaining staff, with most reporting increased turnover rates. For example, North West Ambulance Service’s turnover rate increased from 4.7% to 9.6% between 2011-12 and 2015-16. Staff at the College of Paramedics told us that an increasing number of paramedics are leaving the ambulance service to work for other NHS employers, such as acute hospitals and general practices, although there are currently no data on exact numbers. The reasons people cite for leaving are varied and include pay and reward, and the stressful nature of the job. Ambulance staff, compared with other NHS staff, are more likely to:[8]

Over recent years the ambulance service has been coming under excessive strain due to [9]:

Privatisation of the Service

Privatisation has been aimed at the non-emergency patient transport sector so far. West Suffolk hospital trust engaged E-zec Medical Transport in April 2018. Although the trust is very unhappy with the performance of E-zec, it now finds itself in a situation where it has little choice but to continue with the service as there is no viable alternative supplier. Alex Baldwin, deputy chief operating officer reported Despite assurances, we are concerned E-zec does not have the capacity to deliver the contract to the required standard. We are also concerned it does not have the capability to deliver the contract to the required standard. In either case, it is felt that the degree of goodwill towards E-zec has eroded, such as there is little confidence they will deliver a service of acceptable quality to the trust and its patients.” The report also outlined that E-zec's struggle to recruit staff, reliance on third party vehicles and ‘failure to use available resources’ stoked further doubt. “In April and May 2018 the hospital trust and clinical commissioning group were receiving daily complaints from patients and staff about poor levels of service,” the report continued. “Unfortunately we continue to get poor levels of patient experience.” The report added that ‘regular’ and ‘at times exceptionally robust challenges’ in meetings had ‘failed to have any significant impact on service provision’[1].