Carole Cadwalladr posted a nonsensical tweet today showing the swing of opinion from Remain to Leave during the EU referendum campaign and claiming this as evidence that the Leave advertising worked. 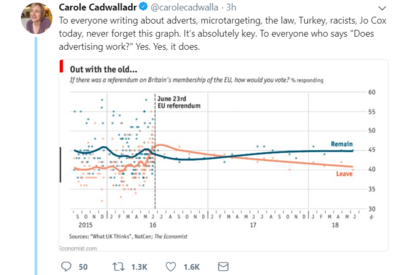 This is a ludicrously childish assumption of cause and effect by Cadwalladr. Consider this graph showing the even more spectacular leap of support by Labour during the 2017 general election campaign. Yet the Tories vastly outspent Labour on advertising... See more

To learn more about Craig visit [1]