The Tory party have been carrying out a programme of closing Jobcentres.[J 1] The reason given for this is that they are no longer required due to the low unemployment figures. They also state that the PFI contracts have reached the end of the 20 year contract and so will not be renewed on these centres[J 2].

Job Centres under review for closure, to co-locate or to be acquired

Support for the long-term unemployed and disabled jobseekers has also been cut. A new Work and Health Programme will assist less than a quarter of the participants of the programmes it replaced. Across the country, hundreds of specialist organisations working with jobseekers have lost contracts, and thousands of experienced employment advisers have lost their jobs.[J 3]

And all this is happening when the roll-out of the new, catch-all benefit called Universal Credit, is accelerating. By the end of 2018, most new working age claimants in Britain, will be claiming Universal Credit[J 4] – and many of them will be required to attend jobcentres. The already intense pressure on a shrinking network of jobcentres will increase further in 2019 when the Department for Work and Pensions (DWP) will begin moving millions of existing benefit claimants onto Universal Credit.

Mandatory personal attendance at jobcentre interviews remains a core requirement of continuing to receive Universal Credit and most other working age benefits. This is especially the case for unemployed claimants who must currently attend their jobcentre at least weekly, or fortnightly if their travel time is less than one hour each way by public transport. Where there is no public transport, they still have to attend every two weeks if they can walk to the jobcentre in under one hour or must walk no more than three miles each way. Claimants outside these limits, or those with particular barriers such as caring needs, are allowed to “sign on”, or report on their work search, fortnightly by post – but they must still travel to the jobcentre to attend more intensive interviews concerning their benefit claim and efforts to seek or prepare for work.[J 5] 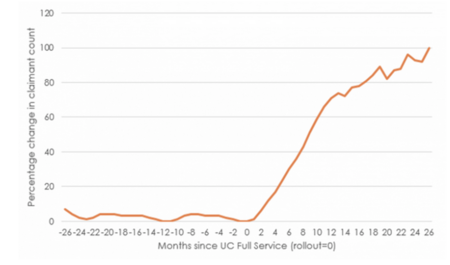 Since mid-2016, the headline unemployment total has been falling – a data point measured by the household-based Labour Force Survey, which includes unemployed people who aren’t claiming benefits. But the claimant unemployment count, which includes those currently receiving Jobseekers Allowance and those on Universal Credit who are expected to work, has steadily increased. In the year to March 2018, it grew by 9% or 73,200 to reach a total of 890,500 claimants.

This increase has been most marked in the areas where Universal Credit has been implemented, and even more so in “full digital service” areas. In the relatively small number of jobcentres where the full service had been implemented longest, before 2016, the claimant count was 38% higher in March 2018 than it had been a year earlier, an increase that wasn’t experienced by those jobcentres where the full service had not yet been implemented. While the final trend is not certain, an analysis by the Learning and Work Institute suggests it’s plausible that the number of unemployed claimants could double to 1.5m by the end of 2020. Yet the DWP and jobcentres have only a third of the resources and staffing that they had in 2012, the last time the claimant count stood at that total. 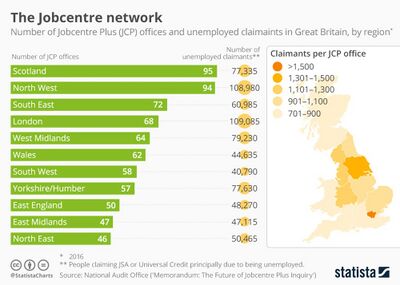 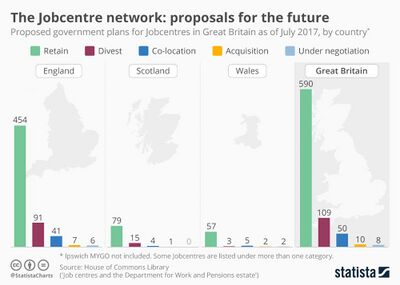 Frances Ryan of the Guardian said "Shutting down jobcentres is the austerity era’s most underhand cut yet. Protests about one north London closure are just a drop in the ocean. One in 10 jobcentres will be cut over the next year". https://www.theguardian.com/commentisfree/2017/nov/02/shutting-down-jobcentres-austerity-underhand-cut

The figure of 535 is intentionally on the low side to ensure that the figure is not exaggerated. It is likely to be much higher by now (June 2018). Many libraries that were closed by councils were then re-opened by voluntary organisations. 525 libraries had closed by 2016, with a further 111 closures planned for the year.

“According to CIPFA’s annual library survey, the squeeze on council funding continues to take its toll on libraries, as spending, paid staff and branches declined again last year (2016/17), for the 7th year running. During 2016/17 total expenditure on council-run libraries fell by £66m, paid staff numbers fell by 5% (869) and there are 105 fewer libraries[L 1] During the same time period visits to libraries fell by 3%, which adds to a 14% decline over five years. Whilst library resources continued to bear the brunt of austerity, the support libraries received to fill resource gaps rose in 2016/7 by 6%, this includes specific grants from the government and other bodies. During the same period, volunteer numbers increased by 8%, 43% since 2012.” | CIPFA December 2017.[L 2]

There are four areas - Sefton in Merseyside; Brent in north London, Stoke-on-Trent and Sunderland - where more than half the libraries have closed since 2010, either buildings, mobile or both. The below table shows number of libraries closed in the period 2010 to March 2016. The data was collected by the BBC via a freedom of information request. Of the 525 libraries closed a number moved in to the voluntary sector. A further 111 libraries were identified for closure in 2016 at the time this data was compiled.[L 3]

One of the impacts of libraries moving into the voluntary sector is that they are reliant on council grants to continue. These grants are uncertain as councils face further tightening of their budgets going forward. Public Library News keeps a list of libraries closed[L 5], although the list may not be comprehensive as some closures are not known.

Further to closures, more libraries are moving to a limited service to cut costs. The image below shows the number of libraries that open more than 10 hours per week and how the number has dropped during the last 10 years.

The figures below show a drop in spending of 38.6% from its peak in 2009/10 if one takes in to account inflation. This is likely to be an exaggeration, however, as spending on staff salaries has been frozen (or nearly so: it has been 1% the year before last. 2% this) for the last five years and staffing represents a large percentage of overall library costs. If one ignores inflation completely, the decline from peak is more than halved at 18%. The true answer will likely be somewhere between the two figures. The figures are taken from the official Cipfa statistics.

Sure Start was created and developed as a way of improving the educational and life chances of socially and economically disadvantaged children. The centres offered families access to services including childcare, healthcare, parenting classes, job skills and playgroups.

By 2010, there were 3,600 centres in the UK. Before that year’s general election, the Conservative leader at the time, David Cameron, promised to protect funding for Sure Start, but this pledge quickly evaporated amid swingeing cuts to local authority budgets.

Over the next seven years, early years provision bore the brunt of cuts to children’s services. According to a study carried out by the National Audit Office, released in March 2018, Sure Start budgets in England were reduced by £763m (50%) between 2010 and 2017, as councils focused scarce funds on meeting an explosion in demand for child protection services.

According to the Sutton Trust, an education and social mobility foundation, a lack of clarity in how individual centres are identified and changes are reported means official figures of 500 closures since 2010 are likely to be an underestimate. According to study carried out by Sutton Trust research, the number of closures are 30%, not 14% as reported by the government, with closures more likely exceeding 1000 centres.[S 1]

After 2010, the budget for Sure Start was no longer ring-fenced, but merged with other programmes. By 2013, national guidance on the ‘core purpose’ of children’s centres shifted focus to targeting ‘high need’ families, rather than open access to universal services.

For this section the headline number understates the number of clinics closed or being closed.

Walk-in centres were one of the last Labour government’s flagship NHS policies. About 230 of them opened in England in the 2000s when Tony Blair and Gordon Brown were in Downing Street.Designed to provide an alternative to A&E and GP services, they were popular with patients.

Holly Maltby, a campaigner at 38 Degrees, blamed the closures on government underfunding of the NHS. “Each time an NHS service is cut through lack of funding, it piles pressure on remaining services.”

On top of walk in clinics being closed,maternity units and community hospitals are being closed. 38 Degrees found that at least 70 services had shut or been downgraded.

The urgent care centre in the centre of Walsall will probably close, even though it opened only last year at a cost of £1 million, under money-saving plans being considered by the town’s NHS clinical commissioning group. The CCG wants to shut the centre to save £951,000 in running costs because not enough patients go there to justify it staying open, it says.

Seven mental health services are at risk of closure, despite mental illness being a top government priority. They include Newholme hospital in Bakewell, Derbyshire, which will go as part of the NHS’s plans to provide more care closer to patients’ homes.

The impending closure of nine GP practices will force the 45,000 patients affected to find a new family doctors, 38 Degrees says.

Again the figure in the headline understates the true figure. The FBU gives the figure at over 40 by 2018.

The government intends to cut it's funding to the fire and rescue service by 20% during the course of this parliament. In the last parliament they cut it by 30%.[F 2]

As a result 11,000 frontline firefighter jobs have gone since 2010 - that is one in six. Stations, appliances and equipment have also been cut. The cuts have been imposed against the background of increased fire deaths in England. New Home Office figures show that in the year ending September 2017, there were 346 fire-related fatalities (including 71 from the Grenfell Tower fire) compared with 253 in the previous year – a 37% increase (up 9% not including Grenfell). 2015-2016 saw a 15% rise in fire deaths compared with the year before.

A full analysis of Fire Service cuts can be found here

The table below lists the prisons closed.[G 1] These prisons are to be replaced by mega-prisons, with the intention of closing smaller prisons and moving inmates to a regional larger prison.

The prison population increased sharply since 2000, so is not a recent phenomenon. The Howard League has drawn to the government's attention to the growing prison population as against fewer prisons, reduced resources and a vastly reduced prison workforce.

The Howard League reported "While the prison population continues to grow, the money and resources available to manage that population growth is simply not there. More and more we see prisoners lying on their bunks with little positive to do. There are problems of prison suicides, rising violence and drug abuse behind bars."[G 3]

Those who have observed the prison estate at close quarters have been uniformly shocked by what they have witnessed and what they have been told. Peter Clarke, was asked by the Ministry of Justice in 2016 to investigate the prison estate. He notes as a matter of “particular concern” the 40 to 50 violent incidents each month. Every two days a member of staff is assaulted. Ex-offender and former drug abuser Mark Johnson founded the charity User Voice to encourage prisoner rehabilitation. “Being incarcerated in this country at the moment,” he says, “is being in a system tantamount to torture. You’re in a place of chaos. You may have left behind a life of chaos but it’s like going from frying pan into the fire.”[G 4]

The six A&Es that are under threat include those at Grantham hospital in Lincolnshire, Poole hospital in Dorset and Huddersfield royal infirmary and Dewsbury and district hospital, both in Yorkshire. https://www.healthbusinessuk.net/news/15112017/nhs-services-close-due-money-problems

There are 46,000 less police, including civilian roles, now than when the Tories came to power