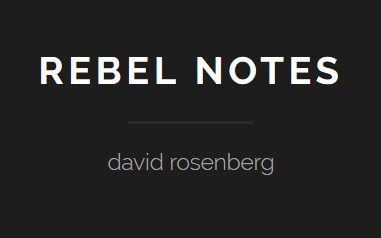 Don’t be disappointed, get angry!

Even if you feel internationally minded, and you like to move in cosmopolitan circles, here is a group of people you might choose not to socialise with: Poland’s Law and Justice Party, Italy’s League, Ukip, the French National Front, the Sweden Democrats, and Austrian Freedom Party. The common factor among all of them is of course that commentators regularly refer to them as “extreme right”, “far right”, or “right wing populist”. The last three have a further similarity. They all have their roots in post-war pro-Nazi circles formed by people either didn’t think the Holocaust happened or that it was no bad thing. But they have sought to rebrand and present themselves now in a more respectable way. Nevertheless, they are still described by commentators as “far right” especially for their extreme nationalism and very negative attitudes towards migrants.... See more

Rebel Notes is the blogg of David Rosenberg. He is an educator, writer, and tour guide of London’s radical history. He is a lifelong rebel and socialist.

Go to all Rebel Notes articles on this Wiki