The number of rough sleepers (including ex-Service personnel) has increased 169% since 2010! In other words, for every 1 person that was sleeping rough in 2010, there are now 2.69!

In 2018, there are more than 123,000 children living in temporary accommodation including bed and breakfast rooms and hostels. This is a 65% increase from 2010!

Some specialist treatment has been the worst affected, with patients awaiting treatment for lung diseases – the UK’s third biggest killer – up by 128% since September 2011 to almost 100,000.

The Government continues to miss its own targets, including for ‘treating or assessing 95% of people within four hours at A&E’, ‘the 18 week maximum for non-urgent operations’ and ‘85% of people diagnosed with cancer should wait no more than 62 days before the start of treatment.’ These targets have not been met for several years!

In January 2018, in an unprecedented move, doctors and consultants from 68 A&E units in England and Wales wrote to Theresa May stating, amongst other things, that 120 patients a day were being managed in hospital corridors and that some were dying prematurely! An utter disgrace!

Two years ago, the Government removed the training bursary for nurses. Nursing applications have since dropped by a third - whilst there are 40,000 unfilled nursing vacancies.

Yes, you read it right!! Forget the Tories claims to be the party to trust with the economy and that they are reducing our national debt! Here are the facts.....

This is all whilst inflicting horrific austerity measures on the population and massively cutting OUR public services!

Incidentally, for the first 10 years of the Labour Government, the national debt went from 43.8% of GDP in 1996-7 to 33.8% (in 2003-4) to 40.9% in 2018. It stayed below the previous debt level for over 10 years! Then the global banking collapse happened in 2008 and the global recession. Our national debt increased (as it did with countries across the world), in large part due to the enormous cost of bailing out the banks.

In case you missed it, the national debt has INCREASED by 64% under the Tories!

This includes 3.1 million children of working parents (this has almost doubled from 2.1 million in 2010). Child poverty is now over 50% in some inner-city areas.

In 2018 – Relative Poverty = 30% (4.1 million children, a 50% increase) and rising. In 2018 – Absolute Poverty = Take a guess on the real figure! The UK as a whole has been left without an official measure of poverty since the Conservative government’s scrapping of Labour’s child poverty targets!

The Institute for Fiscal Studies estimates that relative child poverty will increase further to 37% by 2022 and puts this increase down “mainly to the effect of tax and benefit reforms introduced by the government.”

The Trust accounts for approx two-thirds of UK food banks. Therefore, total UK Food Banks in 2017-18 gave out approx 2 million packs to 900,000 people. The number one reason given for people using food banks was not unemployment or benefit delays/sanctions (though these were common reasons), it was low wages – y’know, like nurses!

A report by the Joseph Rowntree Foundation shows more than 1.5 million people were classed as ‘destitute’ in the UK in 2017 – more than the populations of Liverpool and Birmingham combined.

Analysis of Government figures in September 2017 found that teachers were an average of more than £5,000 a year worse off in real terms than in 2010.

However, a report by the Sutton Trust showed that the real number of Children’s Centres closed between 2009 and 2017 was 1,034 (double the official government number!)

Please note that all figures were obtained from reputable sources, including the Government’s own statistics (including from gov.uk) and the Office for National Statistics. 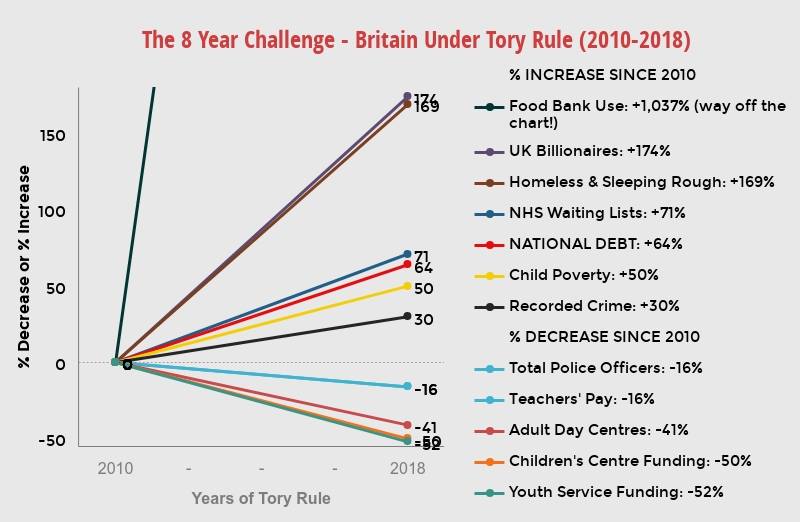 Here are some of the sources of information/facts (and some really interesting articles): 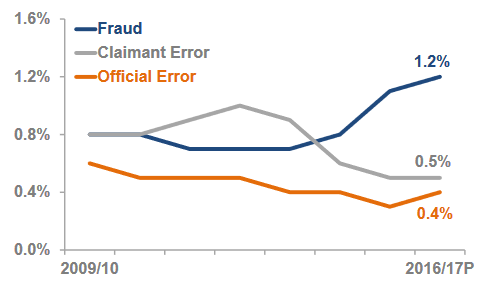