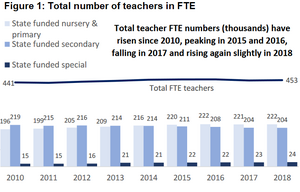 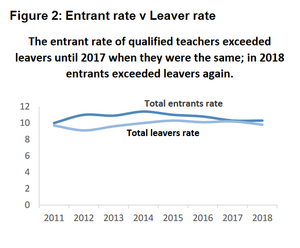 It is difficult to identify exactly what it costs the government to train a teacher as their are so many different training routes. The average seems to be on the £30,000 mark, with interestingly those costing the government the most being the least likely to remain in teaching after 5 years.[5] Based on the cost per new teacher, the government is spending approximately £1.3 billion a year of the education budget on teacher training and yet the number of teachers in the profession is not increasing. 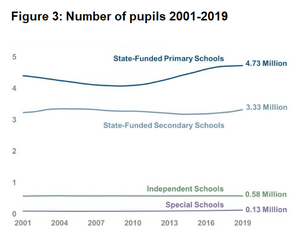 Since 2010 the average size of primary schools has increased by 43 pupils, the equivalent of more than 1.5 extra classes per school.[2] 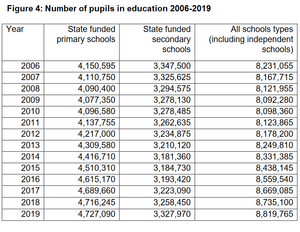 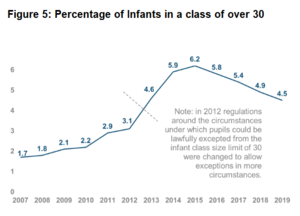 The average size of Secondary schools since 2010 has increased more slowly than Primary schools, but is now starting to gain pace as pupils move from Primary to Secondary education. The increase between 2010 and 2019 was 49,485 pupils. The increase over the next five years will be .[3]

Pupils in Special schools has increased by 6500 since 2010

Average class sizes are rising as a result of teachers leaving the profession, cuts to education spending at the same time as a rise in pupil numbers. The Department for Education revealed that 8.4 per cent of all secondary school classes now have between 31 and 35 pupils, up from 7.7 per cent last year and considerably higher than the 5.6 per cent recorded in 2014. As the number of pupils entering secondary education will increase as many pupils move up from Primary schools this figure will take a sharp up turn over the next 6 years. With 500,000 (approx 17%) additional pupils entering Secondary education, with no increase in teachers or resources, schools will struggle to deliver and will likely see an increase in teachers leaving the profession[4].

Teachers in England have lowest job satisfaction of all English-speaking countries according to UCL Institute of Education (IoE) research. Fifteen of the countries where reasonable comparisons can be made – which include Israel, Sweden and the US – had “much higher” teacher job satisfaction than in England. Researchers analysed data from more than 100,000 teachers who had taken part in the most recent Teaching and Learning International Survey - including nearly 2,500 teachers from England.

"Research shows teachers become dissatisfied with work if they are not given the freedom to get on with their jobs. But teachers in England have seen a big increase in paperwork and data entry in recent years. Cutting red tape would help restore morale in the profession,” - Dr Sam Sims, Research leader at UCL IoE

Much of the issue can be put down to excessive workloads, which are driven largely by a relentless series of government reforms and severe accountability measures[1].

A survey carried out by the NUT foundh 53 per cent of teachers in England and 46 per cent in Wales said they were: “thinking of leaving the profession in the next two years.” The NUT argues that misguided government policy is increasingly the root cause of teachers’ misery and has led to this collapse in morale. The NUT survey also found that more than two-thirds of teachers felt that morale had declined in the past five years and 73 per cent felt that current policy was narrow, restrictive, and uncreative.

Research has found that there are three main motivators in work:

These are the three areas that the Tories have undermined with lower rewards, a growing number of checks of teacher performance and a restrictive regime that does not allow teachers to teach according to needs.

A study from Virgina Tech clearly demonstrated how a system narrowly focused upon pupil achievement and standardised testing had invaded teachers’ working lives so much that they had been completely robbed of any sense of personal autonomy. As one teacher suggested: "I’m not the teacher I used to be. I couldn’t wait to get to school every day because I loved being great at what I do. All of the most powerful teaching tools I used to use every day are no good to me now because they don’t help children get ready for the test, and it makes me like a robot instead of a teacher. I didn’t need a degree to do what I do now. They don’t need real teachers to prepare children for tests and, in fact, I think they could just develop computer programmes to do this." [2][3]

Teachers have seen a 10-15% drop in pay in real terms over the last since 2010 or equivalent to £4000 to £9000 for leader & classroom teachers (£4400 on average as of 2018)[1][2]. In 2019 they were awarded a 2.75% payrise, but schools were expected to find 2% of the payrise out of current budgets which is extremely difficult to carry out when schools are already struggling with funding shortages. Academies, where many are already in deficit, do not need to award the 2%, so in many cases teachers will only receive a 0.75% payrise, pushing their wages even further behind inflation[3].

Teachers and Unions are demanding a 5% rise in September 2019 to try offset the loses due to inflation. This will not bring them back to 2010 wage levels[4].